On my job shadowing experience I learned the responsibility of a teacher side of school. To becaome a teacher I would need a licensure and a bachelors degree in the subjust you want to teacher. For my presentation I did  a voice over so I did not need to stand infront of the class. My presentation could have had alot less background noise because it was distracting and I wish I knew before I recordedthat I needed to explainmycover letter resume thankyou letter and references.. I am really pround of how my presentation turned out, it hit all the requirements and it was filled with explanations. I saw that some of the students presented infront of the class but I did not really wantto do that. For my presentation I wish I would have started earlier because I waited till I had to do it at home which was not fun at all.

I wish that I would have explained alittle more because I was a little broad. And I wish I would have talked slower.

If I could present my presentation again I wouldn’t do it in front of the class. But My presentation went well so I do not think I would.

The easiest part of the presentation process was the recording. I knew what I had to say because it was all of my personal experience so I knew I could not get it wrong.

The hardest part of the presentation process was getting the information onto  20 slides. I felt like the information on the slides were too little. Another thing that was challenging was making sure the audience was not bored.

Now that I have reflected on my presentation, I  know what I have to for my next presentation to make sure it will be the best it could be.

This article shows a 22 year old women collapsed in her house on Februarys 8th because her brain was bleeding. This women was kept on life support for 52 days, was fed threw a feeding tube, and in an incubator  until the baby was ready for birth. The baby was not strong enough to live with out her mothers womb. The baby was born through cesarean section on April 4th, 2 pounds and 16 ounces his name is Angel. The article stated,”‘ Our team took a giant leap of faith,’ Sue Korth, vice president and COO of Methodist Women’s Hospital, said in a statement Thursday announcing the successful procedure. ‘We were attempting something that not many before us have been able to do.'” This article is biased because it is just stating the facts nothing said “I think this” or “this is not right”. This article is pretty sad because Karla was very young and the baby won’t ever meet his mom. Your life could really end at any moment, nobody knew her brain was bleeding it just happened, this is very sad.

How do you feel about this article?  is it shocking? Scary? Sad?

How would you feel if you were close to her? Would you help out with the baby? or would you not care?

Ships and sailors is a game very similar to the game “Simon-Says”.

To set up you need a larger group of people to spread out in like the middle of the room which are the sailors that follow the directions. Then you need a captain, the one who shouts out the commands. When the captain shouts out a command the sailors have 4-5 seconds to do the action or they’re out. They can also be out if the break character. There is 8 commands that you could call:

1. Go West: All must run to their right.

3. Hit the Deck: All must quickly lie on their stomach.

4. Captain’s Coming!: Everyone stands at “attention” (in a salute), and they can’t move from this position until the caller says, “At Ease!” If they laugh or break from the attention, they are dismissed.

5. Man Overboard: Sailors must find a partner. One person drops to one knee the other stands behind them, puts a hand on their shoulder. Both scan the ocean for the overboard man.

6. Three Men Eating: Sailors are to form groups of three and sit down in a circle. Next they are to cup as if to hold a plate and scoop with the other hand quickly as if to feed themselves.

7. Four Men Rowing: Sailors are to form groups of four and sit in a row on the floor. They are to swing their arms as if they are rowing.

8. Walk the Plank!: Five people stand in a single file row hands on the shoulders of person in front of them

In class we read Shakespeare’s play and watched clips to go along with what we read that day. We also had to perform a 60 second play regarding the act we were assigned. In my group I felt like we were a strong working grouping. Our group communicated well and was well prepared we stayed on task and everyone took equal action and participation. To make sure our play was reading we practiced a lot to make sure everyone knew what was going on through out. We didn’t use any props and we did not memorize our line, if we did use those things I feel like our play would’ve been better. Something we could have done better was introduce the characters more clearly because if someone who was not reading Shakespeare would not have known what was going on. On our performance over all our actions and voice were very clear and organized well. The audience seemed interested. And our group seemed confident going up there. Group 3 did very well by explaining there character but I feel like our group was well organized the other group did good ready their papers but did not seem energized about it. Some advice I would give the teacher is to do it in a bigger space because it was a little tight. But overall I liked this project!

When you’re commenting make sure you give helpful hints suggestions or an agree or disagree statement WITH an explanation. You don’t want so say something like “oh. this is cool” or something like “Nope! I disagree”.

Your first impression is not always right, sometimes you could be totally wrong! I have a personal experience. My best friend was talking to a guy. To me, this guy’s body language showed me that he did not really care about anything like school or other people. I tied telling my best friend not to talk to him because I thought he was a jerk. But she said he was not a jerk to her.  I did not believe her so I stopped talking to her for a little bit because I got mad. My best friend and this guy continued to talk and jumped into a relationship. So I grew to realize that she really liked him and as her best friend I had to accept it. I went 3rd wheeling on a date with them and we all talked a lot. I soon realized that he was not that bad and I apologized to her for over reacting.

I’ve realized that I shouldn’t judge a book by it’s cover. In other words not to judge a person with out talking to them.

Dear future high school students here is a couple things you might what to know about high school.

1. Everyone is going to tell you it is a huge difference than middle school, it is. But don’t be scared! The freshmen teachers will help you get the hang of it, most of the teachers are really nice. I bet you will only need a week to get a hang of things.

2. Also don’t ask the upper classmen where a class is or what building you need to go to they will direct you in the complete opposite way and just confuse you more. There is a lot of security guards and teachers to help you on your first few weeks.

3. Computers. The computers aren’t bad but they do take a lot of responsibility. Keep them charged or you can get in trouble. And your English teachers will help you get the hang of them also.

4. Joining a sport from over the summer will make it a lot easier going to your first day because you’re probably already know them really good and you won’t have to look lost in the hallway by yourself.

5. Have fun and don’t make drama. Freshmen year is pretty easy. So don’t be scared. 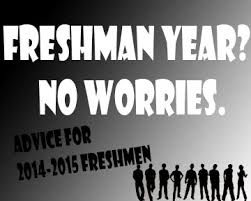 Gabby  Douglas is a US Women’s artistic gymnast. In 2012 the summer London Olympics she won a gold medal, not just a team but also an individual. Gabby was the first African-American gymnast in Olympic history to become the individual All-Around Champion. She is also the first American gymnast to win gold in both the gymnastic individual all-around and team competitions at the same Olympic games. Gabby plans on also competing in 2016 Olympics in Rio de Janeiro, Brazil. I like Gabby because I feel like she worked SO hard at something that she loves and she became successful. “Gold medals are made out of your blood, sweat, and tears” – Gabby Douglas.